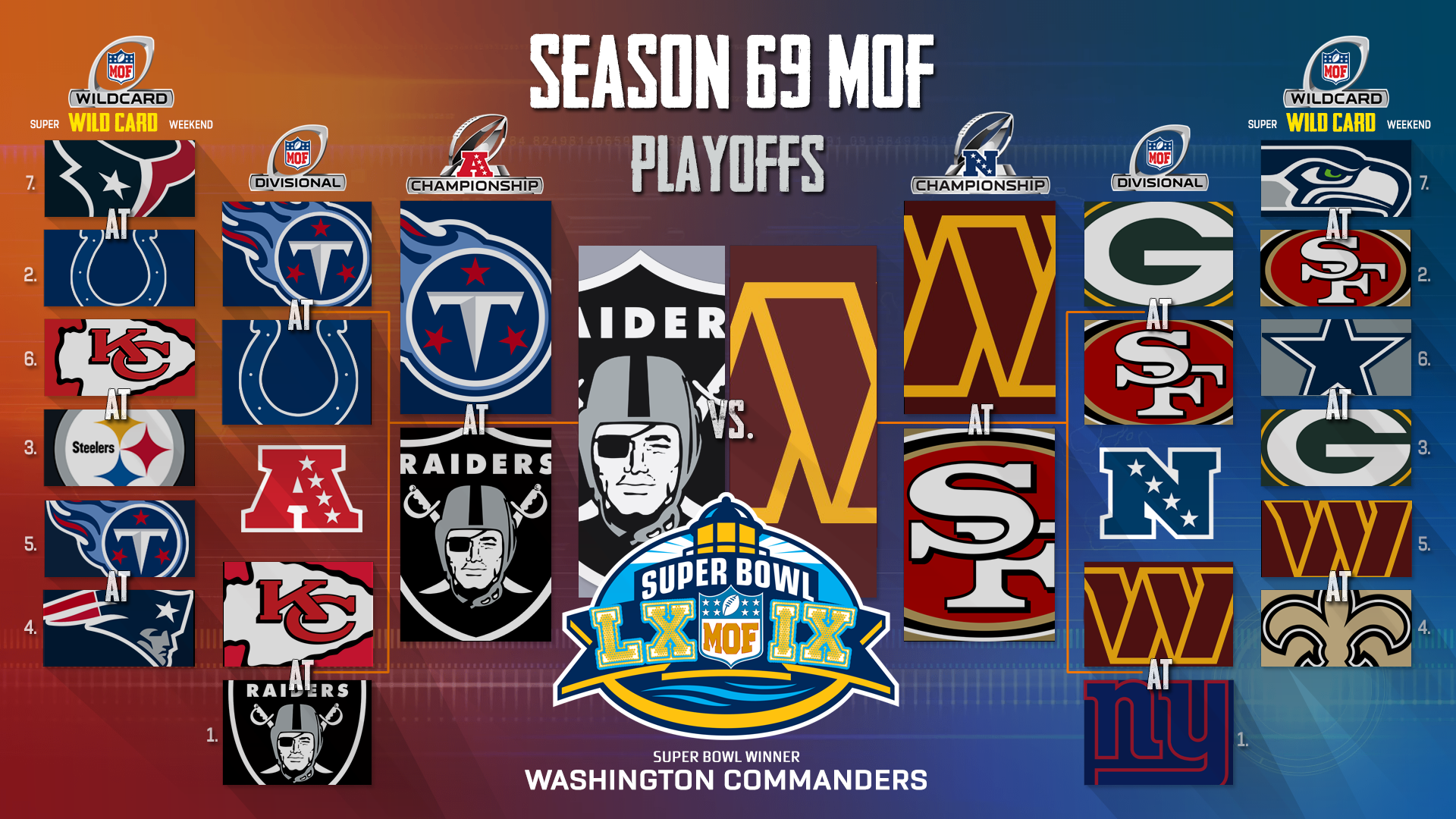 AFC:
Wild Card Round: I like the Colts to continue their fantastic season and defeat the Texans here in the wild-card round. I think the Chiefs and Steelers should be a great matchup like we saw earlier in the season. I think the Chiefs passing game is too much for the Steelers and they will move on. I also think the Titans / Patriots game from a few weeks ago will be different as well. I like the Titans to get by the Pats here. Divisional Round: I am picking the Titans to squeak by the Colts in a high scoring battle maybe like 42-38 or something to that nature. I believe the Raiders have the best pass rush in the MOF and it will be too much to handle for the Chiefs, the Raiders will move on to the AFC title game. AFC Championship: I think this will be a great game, but i will take the Raiders 23-20.

NFC:
Wild Card Round: I like the 49ers to beat the Seahawks once again in the playoffs, this is becoming a great rivalry. I think Estrada's playoff failures continue as the Packers and rookie Coach Victor gets by them. And i like the Commanders to take out the Saints as well. Divisional: We're going to see some great games here. I really like the Packers but i think the 49ers are battle tested in the playoffs, and will defeat them by a score of 34-27. I think the Commanders and Giants could be an instant classic, but i am taking the edge with the Commanders and Coach Portis here by a score of 45-32. NFC Championship: Should be a great game between Washington and San Francisco. I am giving the edge to Washington as they are hot and will remain hot going right to the SB by a score of 34-24.


SUPER BOWL 69:
I think the Raiders take an early lead as the pass rush forces a few turnovers but Betts adjusts, like he knows how and roars back in taking down the Raiders by a score of 24-17.

Season 69 of the MOF has shown the separation of the contenders and pretenders. We are consistently seeing the same owners in the playoffs and probably won’t change much the rest of the edition. With that said, I think these playoffs are still wide open for anyone to bring home a title.

AFC:
In the wildcard round, I think the Colts took a loss to a surging Lions team at the wrong time of the season and Healy has had a rough time beating the Texans so I think the Texans will take the win over the Colts in a mild upset. Texans come limping into this game as well losing to the Chargers in the final week of the season. In the Steelers/Chiefs matchup, if the Chiefs continue to be one dimensional with Mahomes and Underwood, that is going to play right into the hands of Dypko and the Steelers. I see the Steelers taking this one in a high scoring affair. In the final wildcard matchup, we have the Titans going to the Pats and the Pats look like they may be getting extremely hot at the right time. I think they take that momentum into this game and take care of the Titans advancing to the divisional round.
In the divisional round, I have the Texans going on the road and upsetting the Raiders and advancing to the AFC Championship game and they will be taking on the Patriots after they defeat Dypko and the Steelers.
The AFC Championship will be a doozy and both owners are pretty good on the sticks. It will come down to which side wins… Will it be the Texans and their defense or will it be the Pats and their offense??? I am going to take the Texans and their defense and their run-first approach on the offensive side to shorten the game and keep that Pats offense off the field.


NFC:
In the wildcard round, I have the Niners facing the Seahawks for a third time this season as they split the season series. I feel that having home field is going to win this game for the Niners and they will advance to the next round. In the next game, we have the Packers hosting the Cowboys and we all know the struggles that Coach Estrada has in the playoffs but he just may turn that tide in this one and get the win over the Packers. In the last wildcard game, we have the Commanders going on the road to the Big Easy to face the Saints. This may be the best game of the round as I think the Saints keep it close with their defense but Coach Betts will find enough plays to squeak out a win to advance to the next round.
In the divisional round, we have the Cowboys going on the road to face his buddy that got the first round bye going 14-2 with the Giants. This may not be the best opponent to get the monkey off of Coach Estrada back as I think the Giants will take care of business and advance to the NFC Championship game. Niners vs. Commanders is going to be a doozy and I have no clue who to pick here…. Gee wiz!!!! Looks like Coach Betts is on a mission this season and I think he squeaks out a win on the road but it would not surprise me if the Niners pull this one out either.
In the NFC Championship game, we have an NFC East matchup where these teams split the season series and we should be in for a great matchup. I am going to go with the seasoned vet and the Commanders pull out a high scoring game and advance to yet another MOF Super Bowl.

SUPER BOWL 69:
Season 69 MOF Super Bowl will see the Washington Commanders against the Houston Texans and this is going to be another great game. Again, Betts has been on a mission this season and I believe he will finish the deal and capture another MOF Super Bowl championship by defeating the Texans 38-31.